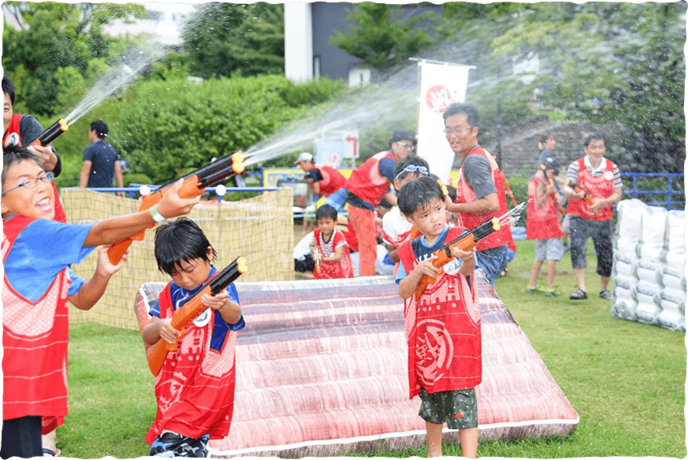 Fight with water guns instead of using matchlock guns!
Shoot your opponents behind the covers!
＊A matchlock gun was generally used in ancient battles in Japan.

*The maximum number of participants for each battle is 60 people.

It was1458.Okinawa was still an independent country called "Ryukyu Kingdom."

The kingdom was in a state of confusion.
There were so many desired ones who wished to take over the kingdom,
which King Sho Taikyu had just founded.

At the same time, two men were there in Ryukyu Kingdom.
One was Gosamaru, who was born in On-na village and governed the central area of Ryukyu.
The other was Asamaru, who had overwhelming power in Katsuren peninsula.
Both of them acquired ruling power and the high rank of the Royal family states "Aji",
and they feared each other as a nemesis.

Finally, Gosamaru was ready for his soldiers to fight against Amawari.
Amawari, on the other hand, raised his voice as "This is the sign of the rebellion against the king."and he had besieged Gosamaru's castle.

This was the battle called "Rebellion of Gosamaru and Amawari " afterwards.
You will be the one who make the history of this rebellion which is full of mystery and adventure!

* For the games, please wear clothes that you don't mind getting wet.
*If you wear a swimsuit during the game, please wear other clothes over it,
which you don't mind getting wet. You can also wear a rashguard/Lycra over the swimsuit.
*Please wear shoes that are easy to move and you don't mind their getting wet.
*You can bring your own hat, swimsuit, towel, swimming goggles, etc.
*Please note that we do not have a changing room.
*The event may be cancelled due to stormy weather.
*You may not be able to participate if you are pregnant or have chronic diseases.
*Please note that you will be responsible for any accidents or injuries during the battle.