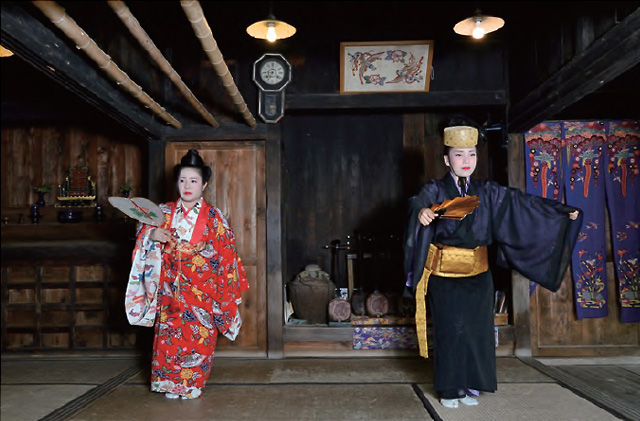 “Kagiyadefubushi” is a dance song, which has been played for more than 300 years in Okinawa and performed as an opening song for the celebrations.
During the Ryukyu Kingdom era, it was one of the songs entitled “Gujinfu” and played in front of the Ryukyu’s King. It’s part of a suite composed of five different songs: “Kagiyadefu” “Onnabushi” “Naga Iheyabushi” “Nakagusuku Hantamebushi” and “Koteibushi.”
“Kagiyadefubushi” is played to wish for longevity, prosperity of the kingdom and their descendants.
Originally, dancers performed the song, disguised in an old man with folding fan and it was the only song to be played as an old man.
There are several theories of the song’s origin. When King Sho-En was still obscure, a smith Okuma known as the originator of Okinawan smith living in Okuma, Kunigami Village sheltered Sho-En. Later, Sho-En became a king, a smith Seiin made a song to express his pleasure and the song was named after Kajiya (smith).
Another theory goes that there was a song called “Kajyadenfubushi” in the collection of Ryukyu’s old poems “Ryukashu Ryuka Hyakkou Kenjyu Setsuryu.” Some believed that this song became the origin of “Kagiyadefubushi.” There are a couple of more theories about its origin.

‘In 2011, a song monument was erected at aforementioned Okuma, Kunigami Village, inscribed with the original lyrics of “Kagiyadefubushi.”
It’s written as “Kagiyade,” but pronounced as “Kajyadi.”
“Kagiyadefubushi ” has been played as an essential song at the banquets in Okinawa today. This is the tune loved by people of Okinawa and one of representative songs we’d like to pass down for a hundred years. 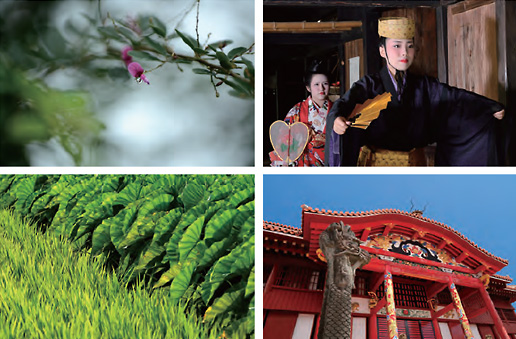 RyukyuMura “dance of Ryukyu sinter”
Schedule: From January 17 to May 6
Time: At 10:00, it is 16:00
Rate: It is 1,200 yen adult 16 years old or older
Dwarf 6 years old – 15 years old 600 yen, under 6 years old for free
Meeting place: Center open space in garden
Appearance: RyukyuMura
Details https://www.ryukyumura.co.jp
We dance song and dance concerning sinter in MICHIJYUNE which is indispensable, and is performed at banquet of Okinawa at “gnarl-style in key shop” (kajadi) 10:00 and 16:00 (nuchibana, dance with bamboo castanets, flower).

Let’s sense old no Ryukyu noutato dance bodily in RyukyuMura! Tie-up plan of RyukyuMura and Okinawa music trip theme music of RyukyuMura for from the end of November to February “smell unpleasant wind clause.” RyukyuMura is full of pleasant attractions. You congratulate the New Year with luck, and can you see demonstration of “wind clause in key shop?” And please sense song and scenery of Okinawa that dance that featured the theme of sinter starts on January 7, and wants to tell earlier for 100 years bodily in RyukyuMura. The details are official sites of RyukyuMura.